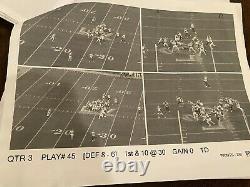 Authentic GAME USED Super Bowl LV on the field Play Sheets from February 7th, 2021. We were able to obtain recovered Game Used one-of-a-kind B&W printed out Play Sheets from the Kansas City Chiefs sideline during Super Bowl LV vs the Tampa Bay Buccaneers. The Chiefs also had the commonly used Microsoft Surface tablets to review all and any plays from their Super Bowl defeat but they also printed out the B&W play sheets that teams would use before the new technology came out. It's very uncommon for a team to also have these play sheets at their disposal but the Chiefs doubled up for this game. These Play sheets aka film or play charts where the only way to review offensive/defensive/special teams formations from a high angle back in the NFL days before they started using the tablets in the 2014 season. Some team never really stopped producing the original printouts or binders as they got configured with the tablets. These print outs are exactly that, all in B&W printed paper, and showcase the "ALL 22" players angle so players and coaches can review the formations played out on the field. There are usually a before the play and after the play sheet for each play (2 sheets per play). Kansas City Chiefs' offensive plays (Tampa Bay's defense). Kansas City Chiefs' defensive plays (Tampa Bay's offense).

So for example the KC Chiefs' 33rd defensive play is only the Chiefs 33rd defensive play of the game and not the total defensive play from the entire game from both teams. The area that says for example (OFF 9-7) would mean that's the Chiefs 9th offensive series and the 7th play in that series. We mostly have all plays from the game. Missing Chief's offense play #31 and #75 which was the last interception by Tamp Bay. We also don't have Chief's defense #16 which was the first touchdown by the Buccaneers and the last 3 plays of the game which were all Brady kneel downs as time expired.

Defensive Play #32, 39, & 45 are all Tampa Bay's touchdown plays. Most sheets have 2x sheets per play so you will get all sheets pertaining to the play you select. Very few only have one sheet.

Sheets and images made using DVSport technology. We do not operate in the field of fake material or reproduced. These items are all 100% authentic from Super Bowl LV on 2/7/2021.

One play of the entire batch was printed twice. These look fantastic framed side by side (both sheets of the play) and really touch upon the inside workings of the game and it's plays whether you are a Buccaneers or a Chiefs fan. PLEASE SEE PHOTOS TO SEE FURTHER DETAILS. This item is in the category "Sports Mem, Cards & Fan Shop\Fan Apparel & Souvenirs\Football-NFL". The seller is "esb80" and is located in this country: US.